Log in | Create your blog | Help
Welcome everyone to the first Media Lab Doctoral Seminar of the year!

On the 28.02.19, at 16.30-19.30, led by Professor Lily Díaz in Learning Centre, JUHO
the doctoral student Heidi Tikka will present her on-going research titled:
Interactions, Materializations – Notes on Doing Artistic Research

In the contemporary landscape of digital, networked media in which new alliances of power, capital and surveillance continuously invent new platforms for their operations, the modes of commodification that they advance increasingly intervene in the most intimate aspects of our lives. My artistic practice has over the years probed these techno-social shifts by questioning how do these forces operate on and reconfigure what we consider our own: the embodied selves and the domains of experience we inhabit.

My research, which is transdisciplinary, practice based artistic research in conversation with a multiplicity of discourses ranging from cinema studies to science studies and new materialism, focuses on human-machine interface as the conceptual-practical site for inquiring into these new forms of embodied and technological intimacy. The central questions I am working on concern the concept of embodiment: how to conceptualize the human body in and through the experimental, heterogenous labours of media art production on one hand and on the other, how to explore and theorize those different convergent sensorial domains that my installations evoke, particularly the entanglements of the aural and the visual with the different forms of tactility.

Pursuing these questions, I will understand my installations as sites of ongoing human and nonhuman labours, and as events that are performed into being in amalgams of interactions and material transformations. I will address these events as materializations, and will inquire into them by producing extensive accounts of the processes in which my installations were developed, produced and exhibited. These narratives also engage in a series of readings of texts that have shaped the becoming of the installations and which continue to be relevant for this retrospective work. However, when writing, I constantly find my work haunted by the question, what does it mean to frame this work as artistic research. How should I make these installations accountable while acknowledging their agency in this process of knowledge production?
Bio 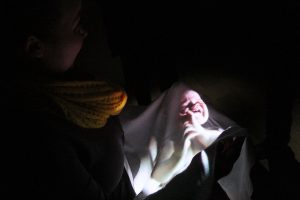 Heidi Tikka is an artist-researcher, whose artistic production ranges from experimental cinema and media archaeology to participatory projects and interactive installations. Most recently she has inquired into different configurations of touch, for instance in “Herbarium”(2016), a media art work for a large touch screen interface, commissioned by Espoo Library and situated at the Iso Omena Service Center. Her films and installations have been shown in ISEA and Transmediale, as well as in Finnish Museum of Photography, Kiasma and Wäinö Aaltonen Museum.  She is the recipient of the first national AVEK Media Art Award (2004). Her other activities include writing and curating. In the past she has worked as a production consultant for AVEK (2008-2012) and in different teaching positions in Media Lab (former Department of Media, 2001-2007).

The Diversity of Artistic Research

Although the area of artistic research is still contested and many prefer to use other related terms in order to avoid the somehow controversial or paradoxical tone of the term in English, the debates around artistic research have continued long enough for us to acknowledge that something like that can be said to exist, if not as a proper discipline, at least as something resembling it. Instead of asking what artistic research is or means, many prefer to ask, what can it do? What can be done with or within artistic research? Today when interdisciplinarity is increasingly sought for to complement the ever-narrowing disciplinary expertise, the possibility of a meeting ground or a (relatively) free space for various disciplines to interact offered by artistic research is needed more than ever. Moreover, the aspect of experimentation and play with alternatives, artistic research as a speculative practice is more and more valued within Academia as well as in society at large. What seems to be the most obvious result of the debates and demonstrations so far is the diversity of the field today.

In this presentation I will discuss some aspects of artistic research through examples of my own practice, in the project Performing with Plants.

An example of a recent publication “Resting with Pines in Nida – attempts at performing with plants”.

Annette Arlander, DA, is an artist, researcher and pedagogue. Previously professor of performance art and theory at Theatre Academy Helsinki (2001-2013), professor of artistic research at University of the Arts Helsinki (2015-2016), postdoctoral fellow at Helsinki Collegium for Advanced Studies (2017), she is presently professor of performance, art and theory at Stockholm University of the Arts (2018-2019), visiting researcher at Academy of Fine Arts, Uniarts Helsinki, PI of the Academy of Finland funded research project How to do things with performance? and the Swedish Research Council funded artistic research project Performing with Plants. 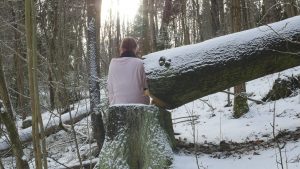 Still image from a video work From the series: “Year of the Dog in Lill-Jans’Wood’ Filmed during 2018 in Stockholm

For artworks and publications, see https://annettearlander.com