Abstract: Pragmatism emerged at the 1900th century as an answer to the question: What has to be changed in philosophy if Charles Darwin is right? First and foremost we are embodied creatures within nature. Culture is a product of nature in the sense that one animal species has created for itself a special kind of social and historical environment. Second, the classical view of experience as sense perception is too narrow. Experience consists of perception and action. Overt action (with or without various instruments), a stock of practical skills, sensorimotor transaction with the environment, is the basic form of experiencing, interpreting and understanding the world. The unit of analysis in the study of cognition (meanings, beliefs, emotions and values) is the organism environment interaction, not the brain or the body. The relation between knowledge and the world is not abstract correspondence between linguistic or other symbolic expressions and the world; it is mediated by various practices. Thinking is anticipation of action, to know is to know what to do, and this holds also for language.

Pentti Määttänen, PhD (Philosophy), is a Docent & Lecturer at the University of Helsinki and at Aalto University.

Abstract: SEMEION is a study about  the new concepts and possibilities of virtual action space and cinematic interaction as an essential part of it. The theoretical part of the study is carried out in the framework of Charles Sanders Peirce’s and John Dewey’s pragmatism, semiotics and aesthetics. At the heart of the study is experimental artistic activity to form a practical platform for testing theoretical ideas, concepts and findings. The practical  platform consists of four independent cinematic works.

The objective of this study is to enlarge the theory of cinema to cover new cinematic features, such as real-time, interactive, tactile, performative and spatial VR/AR forms of moving image. However, to understand interactive moving image and virtual cinematic action space and their future potential, one should first understand what the cinematic interaction itself is in an ontological sense. This guides the study into quintessential philosophical and semiotic questions. The aim is to build a theory that is relevance not only in film related issues, but also to the general questions of philosophy and aesthetics.

Pragmatist semiotics by Charles Sanders Peirce (1839-1914) crystallizes into the following philosophical approaches: Naturalism, nature constitutes understanding. Experience and acquisition of knowledge are not only observations but also activities: Being is acting. Meanings take shape through action. According to John Dewey’s (1859-1952) pragmatist aesthetics, experience (art) is a collective and cultural activity. Physical and symbolic practices are inseparable and a part of nature.

Referring to Peirce and Dewey , the theoretical approach of the study is based on the following philosophical conceptions:

–       The basis of the cinematic experience is in symbolic thinking

–       Cinematic signs have the ability to refer beyond themselves

–       The cinematic object and the subject are always inseparable

–       Art of cinema is a special symbolic practice and will only become a work of art through experience.

The focus is to develop the tools for understanding the structure and montage of the interactive moving image from author’s, especially concept designer’s, screenwriter’s and director’s points of view. The special attention is paid to the challenges of concept design, to the designer’s situation between the new idea and the finished artistic plan, script or screenplay.

The study is implemented through artistic approach and cinematic works produced by the professional film and performing artists’ teams. Practical testing gives useful, illustrative, instructive and sensory feedback from the tested ideas, subjects and concepts. The study also benefits greatly from the direct feedback and observations of the team members, the professional artists and film makers.

The goal is to help deepen screenwriter’s, designer’s and director’s understanding and views on the potential of a cinematic virtual space and interactive moving image and thus provide opportunities for new thinking and concept development. The aim is that the study would encourage future authors in their artistic work to create courageous and interesting concepts for future interactive cinema.

Marikki Hakola is a Doctoral Student at the Department of Media. She graduated from the Academy of Fine Arts Helsinki as a visual artist in 1984. Her works include dance and music films, documentaries, video artworks, performances, stage designs, web projects and artistic research projects. Hakola’s works have been broadcast and screened international on television channels, in art museums and festivals. Her works have been exhibited at several art museums, collections and archives, such as the Musée National d’Art Moderne in Centre Pompidou, Paris, the Helsinki Art Museum and Museum of Contemporary Arts Kiasma Helsinki.

Sally Davison is a dance artist and choreographer whose work deeply attends to the existential qualities of the moving body and life more broadly, focusing in particular on aspects of inclusion, accessibility and equality. Davison is Chairperson of DanceAbility Finland ry an organisation dedicated to promoting inclusion through dance, and Artistic Director of Kaaos Company an inclusive professional dance company based in Helsinki since 2010. 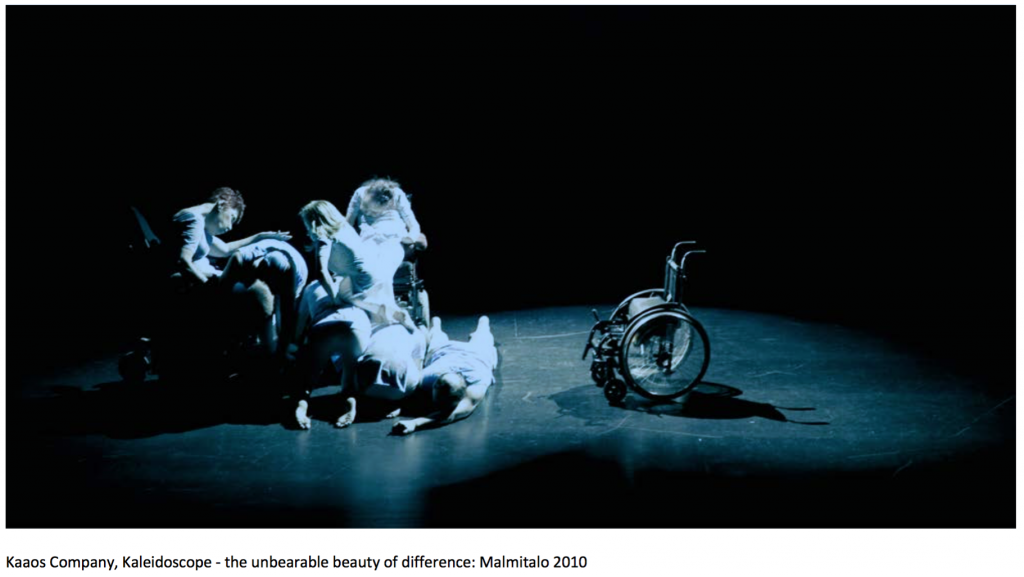 Abstract: This presentation illustrates research carried out with individuals from Dancehearts, a performance group for young people with disabilities. I seek to show that interactive media technologies can significantly increase the level of social empowerment experienced by individuals taking part in group public performance by magnifying the effect of their own actions and movement in the space. Using custom designed wireless electronic controllers, the dancers “play” music and sound using the movements of their bodies and wheelchairs. They are no longer purely a choreographed performer, but in addition they cause affect to the whole performance space through aural interaction, controlling the soundscape used in the performance. For the differently-abled person, the ability to harness media technologies for artistic expression challenges their perceived public role as passive object. They become, through their own actions, active subjects causing affect to the whole audience experience.

Andy Best is a media artist, sculptor and educator, specialising in playful and provocative interactions and installations. Andy’s work tackles social and political themes, and he seeks collaboration in diverse spheres such as data visualisation, live performance, and physical interaction design. Between 2002 and 2013 Andy was principal lecturer of Digital Arts at Turku University of Applied Sciences. Since 2014 he has been lecturer in sculpture at Aalto University. Andy is currently Head of the Center for General Studies. He is a doctoral student at Aalto Media Lab, researching possibilities for social empowerment through collaborative interaction in media environments, with emphasis on working with people with disabilities.