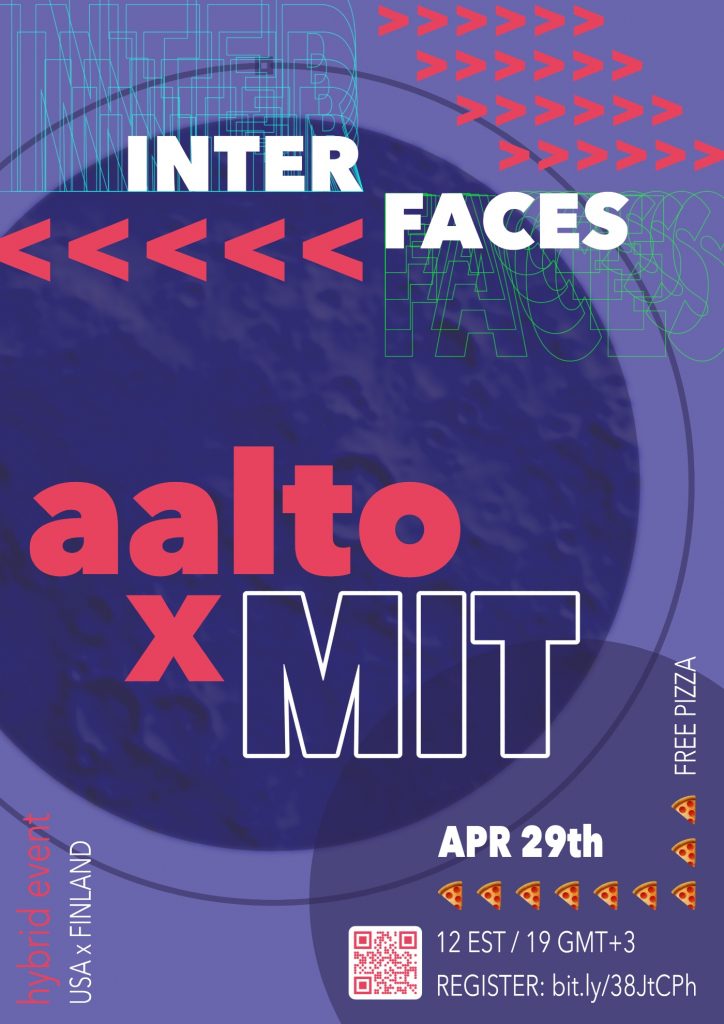 MIT Media Lab< interfaces > Aalto Media Lab is an informal mingling event between the Media labbers in Helsinki and Cambridge. Here you will be welcome to share your ongoing research and projects, and learn about each other’s work both live and in Zoom breakout rooms.

You will be able to gain insight from your distinct perspectives and talk about your ideas. It might be useful to prepare a one slide presentation about who you are and about your interests in the field of new media.

Please register for the event if you wish to attend in-person or online before 28 April.

WELCOME TO THE THIRD NEW MEDIA DOCTORAL SEMINAR OF THE SPRING SEMESTER!

The seminar will take place in Zoom on Thursday, 28 April, starting at 16:30 and ending at 18:30 (UTC/GMT+2, Helsinki, EEST). Mediated by Professor Lily Díaz-Kommonen, we have an interesting presentation by Mamdooh Afdile about his work ‘Toward implicit cinema. A search for a Numinous filmic experience.‘

Before the presentation we will also have a guest talk titled ‘Composing the Performance’ by Professor Kent Olofsson who is a collaborator in Mahdooh Afdile’s recent work ‘Implicit Cinema’. Kent Olofsson is a Professor of performing arts for the research area Concept and Composition at the Stockholm University of the Arts.

In his presentation, Professor Olofsson will discuss how he has been exploring musical composition as a dramaturgical device in the creation of performing arts. He will use examples from his works in theatre, dance, radio plays and opera to demonstrate the artistic processes that aim to integrate the elements in performances into polyphonic theatre experiences. He will also discuss artistic methods in the collaborations with performers, scenographers, playwrights, and directors. His methods challenge traditional hierarchies and working structures, which change and expand working roles in productions.

‘Toward implicit cinema. A search for a Numinous filmic experience.’
by Mamdooh Afdile

Predicting how cinematic experiences will evolve in the future is a challenging task, arguably because the fundamental question of why we watch movies is still not clear. A number of theories were proposed to answer this question, yet the debate is still ongoing. In this brief presentation I will propose my answer to this question based on novel results from unpublished data providing an insight on the leading motivation for watching fictional movies. Furthermore, I will also present preliminary results from my current artistic research “Implicit cinema”, that builds upon these findings. Implicit cinema is a meditative and reflexive audiovisual experience inspired by Carl Jung’s Active Imagination method. This audiovisual experience aims to give an alternative to the hyperstimulative media we are currently surrounded with, by engaging in a self-reflecting experience, facilitated by projective viewing mode. 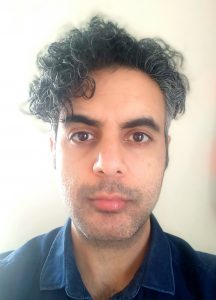 Mamdooh Afdile is a filmmaker and researcher interested in interdisciplinary approach to filmmaking and production by integrating neuroscientific and psychological perspectives to audiovisual art practice. In 2019 Afdile developed PMSM; a method for investigating the subconscious brain with movies, in collaboration with neuroscientists at the brain and mind lab in Aalto. In his latest publication in 2021 he introduced the Scientific Hypothesis Approach to filmmaking practice, which was showcased in his short film “Helsinki Accord”. Currently Afdile is an Assistant Professor in the film and media department at Stockholm University of the Arts.

Kent Olofsson is a composer and an artist in the field of performing arts with an extensive artistic output that spans a broad range of genres, ensemble types, art forms and contexts including music for orchestra, chamber music, electronic music, contemporary theatre, dance performances, opera, radiophonic art, and rock music. In recent years his artistic work and research has been particularly focused on exploring musical composition as dramaturgical strategies in interdisciplinary and intermedial theatre performances. In his thesis Composing the Performance: An exploration of musical composition as a dramaturgical strategy in contemporary intermedial theatre from 2018 he discusses artistic and collaborative processes in performances that are situated in the intersection between contemporary theatre, new music, radio plays and performance art. Recent works and productions include the highly acclaimed Independence Day and In Search of Lost Time (a staging of Proust’s novel), two intermedial stage works created in collaboration with actor, writer and director Nina Jeppsson. Olofsson is a Professor of performing arts for the research area Concept and Composition at the Stockholm University of the Arts. 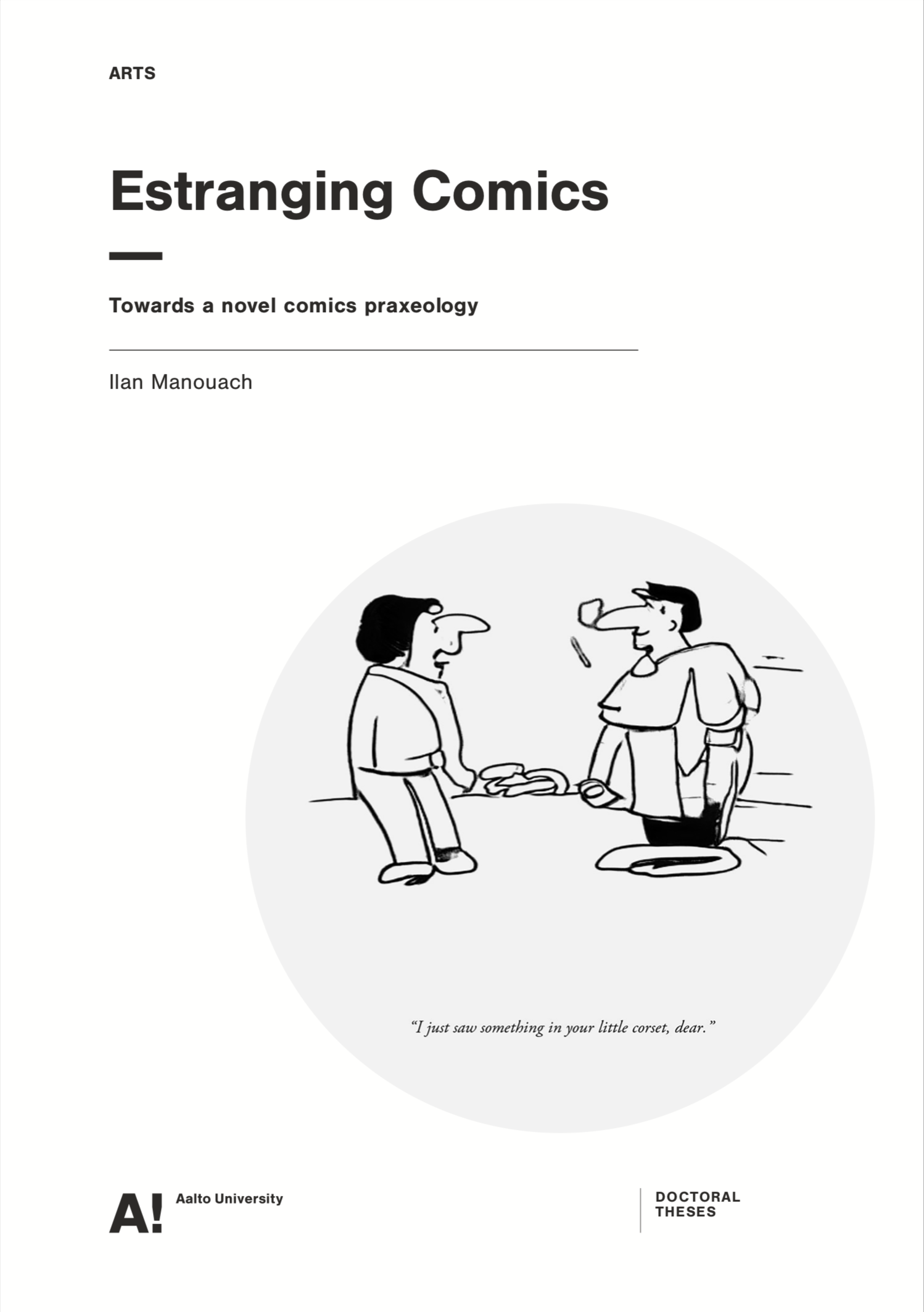 MA Ilan Manouach will defend the thesis ‘Estranging Comics – Towards a novel comics praxeology’ on 22 April at 12:00 in Aalto University School of Arts, Design and Architecture, Department of Art and Media.

The defense is organized as a hybrid event and will be held both live at Väre, lecture hall F101 (Otaniementie 14, Espoo) and in Zoom (please click here for link).

The doctoral thesis is available and publicly displayed 10 days before the event here. 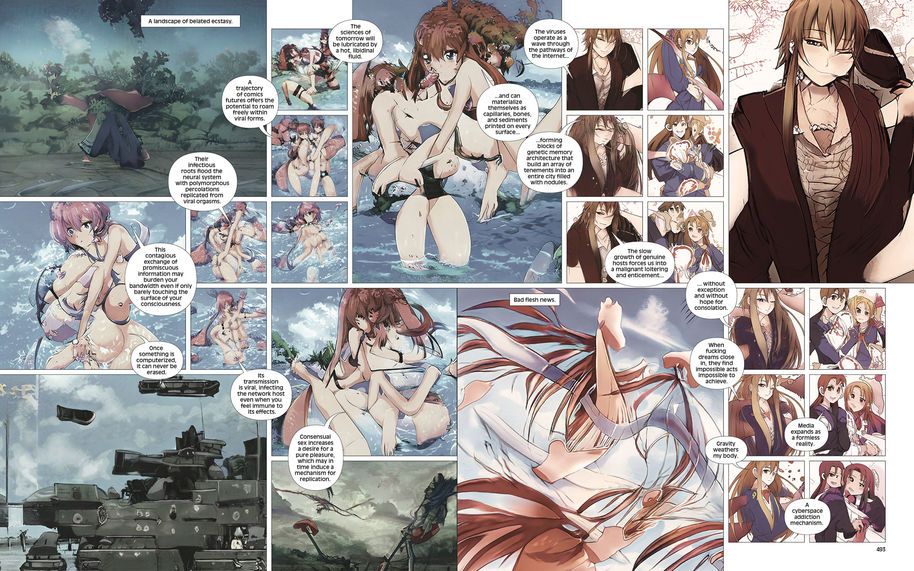 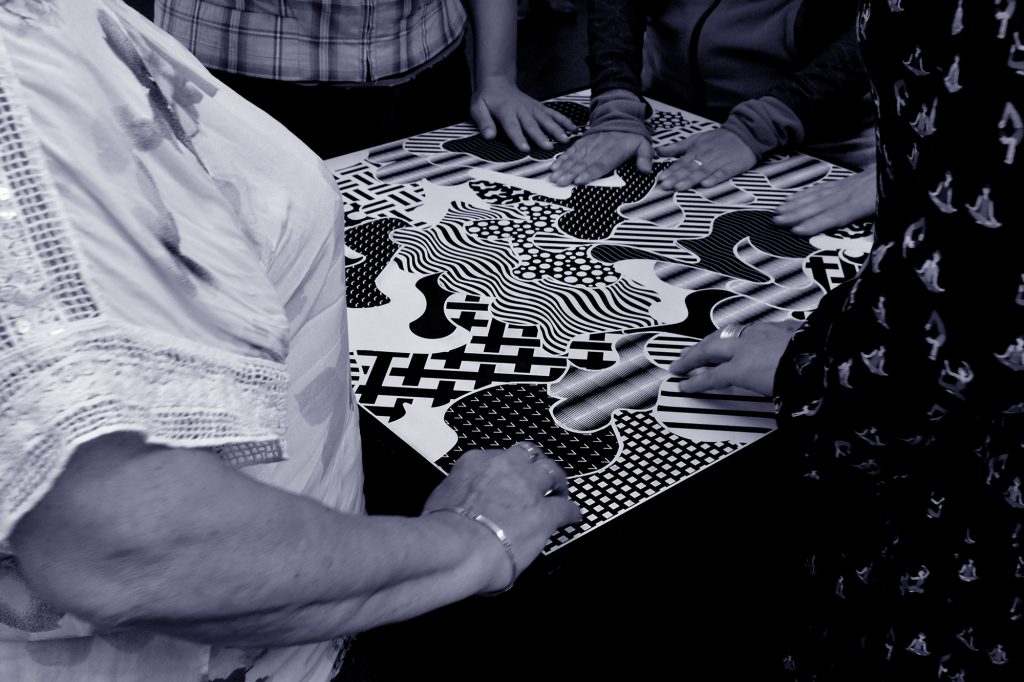 The industry-wide adoption of digital and network technologies has produced long-lasting and unevenly distributed effects in all the sectors of the comics industry. The globalization of markets and services has profoundly reshaped comics labor. Its effects are economic (the precarization of craftsmanship traditions), social (the rise of entrepreneurial fan culture and the consolidation of increasingly diversified communities with novel forms of amateur and semi-professional activity), technical (the introduction of digital tools for the distribution, the archival and retrieval of media artefacts) and aesthetic (the gradual integration in the production pipeline of AI and synthetic media). As is demonstrated by the recent emergence of radical forms of experimentation documented in the Conceptual Comics media collections of Ubuweb and Monoskop, comic artists are often able to leverage the dependencies of the ever-growing network infrastructure of the comics industry. Nevertheless, these disruptions foreground an epistemic crisis in the understanding of contemporary comics, both in academia and in more traditionally established professional spheres.

This thesis embraces an attitude of productive estrangement towards the medium’s forms, material qualities and operations, and constructs comics as a “contemporary object”. According to philosopher Anne-Françoise Schmid, a contemporary object is an extra-disciplinary entity that is massively distributed in space and time. Understanding such an object depends on the increasingly aggregate nature of knowledge production and dissemination in the computational age. Both in theory, with a series of papers in peer-review journals, and in artistic practice, by way of published comics and commissioned curatorial projects, this thesis examines the mutations of the comics ecology as an expansion of the scope of knowledge. It embraces the cumulative impact of digital transformation and articulates a novel comics praxeology predicated on two conditions. First, the thesis appeals for a systematic exploration of comics outside of narrow media purviews, the implicitly disciplinary conceptions, and the dominant historical perspectives in Comics Studies. It aims to develop a conception that embraces a rigorous application of a non-hegemonic interdisciplinarity in comics research. Second, and most importantly, the thesis argues for the expansion of operational agency on the part of comics professionals. This agency is described as a heightened contextual appreciation of the industry’s infrastructural backend, an awareness of its imbricated institutions and a diversification of the professional toolbox. I argue that a novel comics praxeology is a necessary attribute in order to embrace future, speculative, unclaimed or hitherto impossible forms in comics expression. 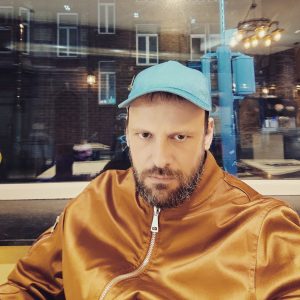 Ilan Manouach is a researcher, a musician and a multidisciplinary artist with a specific interest in conceptual and post-digital comics. His research examines how this century’s frontier technologies such as AI, financial technologies and globalized logistics reshape the comics industry. He is mostly known for Shapereader, a system for tactile storytelling specifically designed for blind and partially sighted readers/makers of comics. He is the founder of Echo Chamber, a Brussels-based non-profit organization with the mission to produce, fundraise, document and archive radical and speculative artistic practices in contemporary comics. The topics of his research and artistic practice include conceptual comics, post-internet publishing, and synthetic media and AI. On the side, Ilan works as a pirate/librarian for the Conceptual Comics Collections at Ubuweb and Monoskop, is an appointed expert in experimental comics for the Belgian government for its national public funding program (CCAP) and works as a strategy consultant for the Onassis Foundation and its visibility through its newly funded publishing activity.