This is an artistic research into the materiality of typographic text. In everyday settings, the conventions of ordinary text documents render them almost transparent for their reader. At the same time, the conventions are so visual that texts are often recognised before reading, just by looking. As a designer and a researcher, I expose these conventions in “Epägenesis”, my experimental writing project which starts from appropriating found text from ordinary text documents.

In “Epägenesis” (eng. “Ungenesis”), the persuasive power of form is exposed by my entangled gestures of writing, designing and reading, calling into question the established categories of ”form” and “content”. What is subsequently exposed is the situated knowledge and skilled practice of a text designer.

The dissertation consists of two books (X and Y), where X marks the practice-based part and Y is a study that sheds light on the project. Here, X and Y define a space where practice and theory make new diffractive patterns, producing new knowledge where the two are inseparable.

The first book, “Epägenesis: Katalogi X”, collects my experimental texts in four series: Alfa, Beeta, Delta and Gem. In writing these texts, I borrow methods and constraints from conceptual and procedural writing.

In this study, I reread my experimental writing in Epägenesis through theories and concepts used in examining the visual and material aspects of typography. Linguistic and literary studies, art history, and visual and media studies have previously shown interest mainly towards textual artifacts that are recognisably material, i.e. unconventional. Multimodal research also recognises how texts are produced through various practices. In my research, I read typography through new materialist concepts, which suggest that text is always material-discursive regardless of if its form is prominent or transparent to its reader. New materialist thinking allows me to show how typographic writing is entangled with language and matter, with impact from both human and nonhuman. In my research, I am particularly interested in how this impact gets entangled with the notion of the public.

The history of typography is the history of printing, which carries with it many preconceived ideas about origin, authorship, and value. The entanglements of writing, printing and typography deserve to be examined carefully just as typographic practices and conventions migrate onto digital environments, where they emerge and transform in networks devoid of subjective authorship or discernable origin. This might be a turning point which will reveal that us humans never did our writing on our own, and not only do we write, but through material-discoursive agents something is always also epigenetically written into the world.

Showing evidence of the extensive impact of typography on the lives of publics is not easy, but my thesis proposes a certain ”sociology of texts”. This is a space where the categories of language and image, form and content, convention and invention collapse. Instead, new differential, entangled relationships are recognised in how typographic choices impact our shared world and its patterns of variation and change. With my multiple shifts in perspective, scale, and method, this thesis points to how the smallest punctuation marks are entangled with the vast phenomena of knowledge and power.

This doctoral thesis consists of two parts, X and Y, which will be pre-examined and evaluated together:

Epägenesis is an experimental writing project where I borrow methods and constraints used in literary practices of conceptual and procedural writing. Epägenesis: Katalogi X is a 280-page book, printed and sewn. It documents all my textual experiments which are then discussed and contex- tualised in the Study Y. 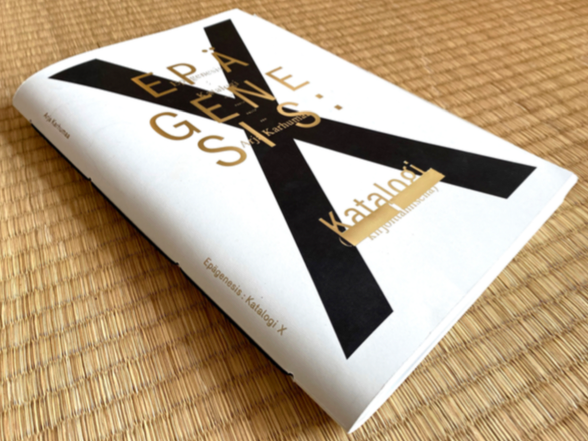 Arja Karhumaa is a text designer, a feral academic, and a language animal, not to mention Assistant Professor, and Head of Visual Communication Design MA programme at Aalto ARTS. Her doctoral thesis is an artistic research into the (new) material aspects of typographic writing and the situated knowledge of a text designer, and it proposes a certain ”sociology of text”. The artistic production of the thesis is documented in Epägenesis : Katalogi X, a catalogue/publication of conceptual and procedural writing.

In her practice, research and education, Karhumaa is searching for new currents and possible modes of contemporary academic and critical practice within visual communication. Her specific interests are language and typography, publication as art/design practice, and positioning communication design in contexts such as new materiality and intersectional feminism. Karhumaa has held workshops and participated prominent design competition juries both in Finland and internationally. She is co-founder of the non-profit independent publishing platform Multipöly.