Discussion will be in English.

Inspired by critical and speculative design approaches, the Feeler prototype presents an extreme, yet plausible case of monitoring physiological data, which consists in monitoring brain activity to detect learners’ attention and relaxation levels during independent study. The design of the prototype was influenced by human-centered tradition and the participatory design approach. The prototype allowed students to experience and researchers to study a hypothetical solution regarding the use of self-monitoring tools during independent study.

The tests conducted as part of this research brought light into the dominant values and socio-economic discourses associated to mainstream uses of monitoring tools, and supported students critically reflect about these tools. In this regard, this research highlights the value of critical and speculative design approaches to research and discuss emerging technologies in learning and teaching.

This research identifies several design principles, which are grouped around the key themes of self-knowledge, agency-oriented technology, reflection and self-regulation. These principles are exemplified with the Feeler prototype in order to help practitioners and researchers understand how the empirical findings can be translated into actionable ideas when designing monitoring tools. This research points at data-privacy and design for autonomy as important design implications for the design of monitoring tools in learning. There is also a need for further research on these.

Monitoring technologies enable the automatic collection and analysis of data to provide feedback about diverse activities and processes. Despite these technologies are increasingly present in different contexts of human life, for instance in the quantified self movement, in learning, monitoring tools are still an emerging technology. To date, most approaches to use monitoring tools in learning have focused on finding application areas without problematising the context of use. Little attention has been paid to issues like the nature of data and the inferences that are made based on them, the role of students in learning, and the conception of learning and technology. This dissertation addresses this research gap and provides an understanding of the issues related to the design of monitoring tools and the adoption of techno-monitoring practices in learning.

This symposium addresses the future of the artists’ livelihood. Hosted by Kiasma, and co-organised by Uniarts Helsinki, Aalto University and the University of Helsinki, the event focuses on the rapid changes in contemporary society and new affordances that those changes introduce for the professionals working in the arts field. The precarious work market suggests new roles for arts professionals and their education, but also opens up new opportunities for art researchers to probe into the complexities of the late modern society, culture and working life. These and other questions around artists’ future livelihood, along with questions of societal responsibility, are discussed during the symposium.

The symposium invites artists, art-related researchers, art educators, art students, and other stakeholders interested in the artist’s livelihood on Tuesday November 13, 2018, 10 am – 2 pm, at the Kiasma Theatre. Participation is free of charge.

The symposium language is English.

Welcome to an open visiting lecture:

Department of Media is pleased to host

Horst Hörtner will introduce the Ars Electronica Futurelab and by referring to “Art Thinking“ focus on the power and importance of Visions to our future. The necessity of Visions become more important at times of fundamental changes, as we currently experience under the influence of the so called “digitalization” in its appearance as Artificial Intelligence.

Horst Hörtner is a media artist and researcher. He is expert in design of Human Computer Interaction and holds several patents in this field. He started to work in the field of media art in the 1980ies and co-founded the media art group x-space in Graz/Austria in 1990. Hörtner is founding member of the Ars Electronica Futurelab in 1996 and since then directing this atelier/laboratory.

Since 2013, Horst Hörtner also holds a position as conjoint Professor at the University of Newcastle/Australia. He is working in the nexus of art & science and giving lectures and talks at numerous international conferences and universities.

This lecture is open to all!

Our new DA candidate, Dohee Lee, will be presenting her initial research plans.

The neglected question of telling the life story of someone else 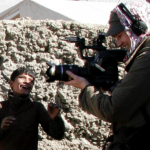 My name is Tone Andersen and I’m a Norwegian cinematographer and filmmaker. Many of the films and programs I have worked on has been about strangers from a different country, a different culture, whom often speak a language I didn’t master. In countries like Palestine, Pakistan, Thailand, Kongo, Afghanistan and Somaliland I have been continuously facing the challenge of finding the way to tell their personal stories for a Western audience. Though the familiar reality to many documentarists worldwide, this is a question often not problematized. What are the advantages and disadvantages of coming in as a foreign filmmaker? Can a foreigner ever tell a local story in an authentic way? Through examples of projects I’ve worked, I will give a short talk presenting my personal reflections and the challenges in dramatizing the lives of others with a focus on the foreign setting.

Tone Andersen: After graduating from SIADUK, she started out as a camerawoman in the Middle-East in 2002. Since then she has worked as a cinematographer, director, producer and editor in various formats world-wide. She has shot award-winning stories on social and human rights concerns from Asia, Africa, the US, the Middle-East and Europe. Her debut documentary as a director; When the Boys Return premiered in IDFA in 2012 and won several prizes at festivals around the world. In 2016 Andersen and her partner Mamdooh Afdile founded their own production company, Klar Film. There Andersen currently works as a producer and screenwriter, developing ideas for TV-series and film. 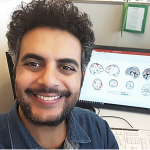 The unspoken truth about our prejudice and negative attitude toward others left psychologists and researchers stand puzzled on how to investigate a behavior that many are ashamed to admit. We tend to “keep our thoughts to ourselves” when we suspect that the surrounding might be judgmental or dismissing. This behavior have caused a challenge to investigating negative emotions toward others. In this short talk I will present my work in trying to address this limitation by combining movie viewing with brain imaging methodology. The brain doesn’t lie when it comes to what it likes and what not.

Mamdooh Afdile graduated from the Sam Spiegel Film & Television School in Jerusalem in 2005. He has extensive experience in producing, directing, shooting and editing film and TV programs in a wide variety, from NGO advocacy films, reality TV shows, to feature films. Afdile has also worked as a film lecturer and consultant. As well as developing ideas for KlarFilm, he currently a doctoral candidate in media and neuroscience at Aalto University in Finland.

From Narcissus’s pond through reflective surfaces and modern age selfies, the concepts of self, body-image, and self-awareness have been strongly influenced by the human interaction with reflective technologies. As digital media pervasively enters our lives, a new dimension of self-documentation becomes a major force in shaping the conception of the narrative-self. With the current wave of Virtual Reality technology making its early steps as a consumer product, Media artist Daniel Landau, set out to explore the new ways in which VR impacts our concepts of self and self-awareness; and the opportunities and challenges that re-embodiment in VR brings to the way we perceive the ‘self’ in relation to ‘others’. In his lecture, Daniel Landau will map the empirical studies he has designed comprising his Doctoral research.

Daniel Landau is a media artist, researcher, and lecturer. He studied Computer Music and New Media at the Royal Conservatory in The Netherlands. Residing at the intersection of Art, Technology, and Science, Landau’s work explores the Impact of virtual embodiment on the construct of the Self. His work has been presented in major venues, museums, and festivals worldwide including Jerusalem, New-York, London, Amsterdam, Berlin, Shenzhen, Tokyo, Paris, and Mexico City. Daniel is regularly invited to give talks about his art and science projects in institutions and festivals worldwide, among them are CalTech, Stanford University, UCLA, University of Copenhagen, Aalto University. Between 2012 and 2016, Daniel led the Media Studies department at the Midrasha Faculty of the Arts, and since 2014 he lectures at the Interdisciplinary Centre, Herzliya. Daniel was recently invited to UCLA as a visiting lecturer and he is currently a doctoral candidate at the Aalto University Media Lab, Finland.

The Faculty of Communication Sciences (COMS) at the University of Tampere invites applications for a fixed-term doctoral researcher’s position starting from November 1st, 2018, or soon thereafter. The length of the position will be decided separately (max. 3 years).

The position is part of the field of visual cultures / visual studies, and aims to support its work and visibility in Finland. The tasks include research on visual cultures according to the applicants own research plan, a survey of the development and use of visual technologies, as well as the organization of an annual seminar. The researcher may, upon agreement, use this material as part of her/his doctoral research.

A person appointed as a rdoctoral esearcher must hold a Master’s degree or higher, and be able to pursue scientific research independently. The appointed researcher should preferably have an understanding of visual culture studies, media studies, communication, cultural anthropology and/or sociology. The position requires good cooperation skills, willingness to travel, and good written and spoken communication skills in English.

The preliminary salary is based on level 2 (2005,71€) of the job-related salary element for teaching and research personnel in the salary system of the Finnish Universities. The basic salary will be supplemented with a performance increase up to 46,3 % based on the employee’s individual performance. The position carries a six-month trial period.

Please submit your application documents through the University’s online application system by 15:00 Finnish time on 24.10.2018 The application should be sent with a curriculum vitae, copies of the degree diplomas, a ca. 20 page example of the applicants scientific writing skills, and other materials considered relevant such as letters of recommendation. Applicants may be invited for an interview in person in Tampere or online.

For more information about the application process, please contact: