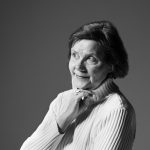 It is with deep regret and sadness that we must inform you of the passing of our long-time colleague and friend, Professor Merja Salo. She passed away on 16th of August 2018. At Aalto University School of Arts, Design & Architecture, Merja was Professor of Photography and Visual Communication, responsible for Photography research and related doctoral studies. Merja had been seriously ill for some time, fighting with cancer, and was intending to retire at the end of August. One week before her passing away Merja was still planning to give a lecture in her retirement seminar in September, but then her condition deteriorated suddenly. The Department of Media is deeply saddened by her sudden departure and she will be sorely missed by all of us who have had the pleasure to work with her, and study under her supervision during the last 27 years.

Merja’s funeral and remembrance event will be on Saturday 8th of September at 10.00 in Hietaniemi. The funeral is open to all, and an invitation was published in the deaths announcements section in Helsingin Sanomat newspaper on Sunday 26th of August.

It was Merja’s wish that, instead of flowers, people would consider making donations to the Finnish Natural Heritage Foundation. A collection in Merja’s name has been created by them. More information on the fund: http://www.luonnonperintosaatio.fi/fi/merja-salon-muistorahasto