Some days ago, William Gunn, Head of Academic Outreach for Mendeley, tweeted about the availability of the latest Journal Metrics. 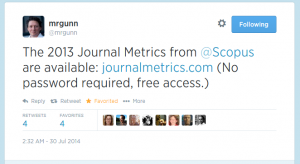 The number of years is solely a matter of layout; the table in the Data tab has so many columns already that you need to scroll horizontally to see them all, and that’s a pain. AFAIK the values in SNIP 2012 and SNIP 2013 are identical, so I left out the previous year.

Short excerpts from the web page of respective metrics (bolding is mine):

SNIP measures contextual citation impact by weighting citations based on the total number of citations in a subject field. The impact of a single citation is given higher value in subject areas where citations are less likely, and vice versa.

SJR is a measure of scientific influence of scholarly journals that accounts for both the number of citations received by a journal and the importance or prestige of the journals where such citations come from. It is a variant of the eigenvector centrality measure used in network theory. Such measures establish the importance of a node in a network based on the principle that connections to high-scoring nodes contribute more to the score of the node

While at it, I also added the possibility of filtering publications by School when all items are visible, i.e. nothing is selected from the Title nor Journal.

Please note that the citation count in this app comes from the Web of Science (WoS), not from Scopus.

Data Curator at Aalto University. When out of office, in the (rain)forest with binoculars and a travel zoom.
This entry was posted in Coding, Data and tagged altmetrics, IPP, Journal Metrics, Scopus, SJR, SNIP. Bookmark the permalink.