On game articles and megajournals

On a hot work day like this, you need to take a relaxing break from time to time. While at it, why not play with the altmetrics web app? For example, you might ask yourself: are there any publications on games or gaming? Well yes, indeed there are.

But before we continue, some general remarks on two extra data sets.

The colour of the circle still shows the School, but some circles have got a yellowish outer layer (that’s stroke in the ggvis parlance, and the colour is officially gold). This tells that the item – article or journal, depending on the dimension – is Open Access. More precisely, one that belongs to the core journal collection of Web of Science, and has a record in the Directory of Open Access Journals (DOAJ). I mentioned this in my previous posting, but let me repeat: data is courtesy of Lib4RI from Switzerland. Danke schön!

The other new data set is of Finnish origin, by Publication Forum (JUFO). JUFO is now among the values you can choose to either axis. What JUFO does is that it gives a ranking to publications. You may have heard, that Ministry of Education and Culture is revising the funding model for universities as of 2015. Here’s a quote from the proposal:

As far as I know, the Level 0 is not used any longer, or at least it is absent from the data. Few publications have no Level at all. If you see some circles that float in the outskirts of the plotted graph, it’s these ones, because without any value they don’t fit in the scale.

BTW, if you wonder what JUFO stands for, it comes from the Finnish word Julkaisufoorumi. 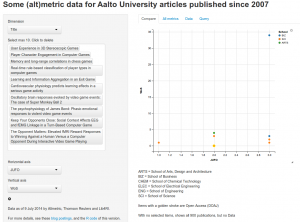 Here we have, in a JUFO ranking vs WoS citation comparison, 10 items chosen from the Title dimension (type game). But wait, why only 8 circles? That’s because some share exact the same values, and are thus plotted on top of each other.

Articles are spread on all JUFO Levels. One Open Access item on Level 2.

All but two have been cited, but one is higher on the vertical axis. Hover over it. From the tooltip you’ll see the first words of the title. It’s about the psychophysiology of none else than James Bond, published in the journal Emotion in 2008.

What about altmetrics? Change the vertical axis to Twitter and horizontal to, say, Altmetric score. 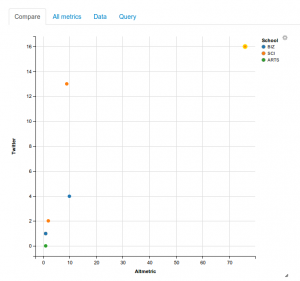 Now the picture changes a little. The most tweeted article is the one published in PLOS One, which is Open Access. To me, this seems logical; it doesn’t usually make much sense to tweet about an URL that cannot be accessed by all readers.

In their posting The 3 dangers of publishing in “megajournals”–and how you can avoid them, the ImpactStory blog refers to research findings which state that Open Access can get you more readers, and also more citations. Here, we cannot really see either, for two reasons.

First, to have any clue of the amount of readers, i.e. page views and PDF downloads, you need to traverse the links all the way to the publication site, and find the Metrics page or some such. It’s worth doing, though, if you have time, because information there gives much more context.

Second, there is only one Open Access item in my small sample, published last year. It has zero WoS citations so far, but you’d need to be a clairvoyant to say anything more. From my small PLOS ALM visualization you can check the (somewhat outdated) status of that article, Keep Your Opponents Close: Social Context Affects EEG and fEMG Linkage in a Turn-Based Computer Game. 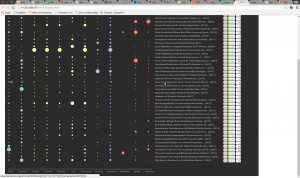 If you’re interested in Altmetric scores, follow the links to their article landing page, and have a look at the percentiles given there, in the Score tab. There is also a link to this helpful knowledgebase article on how the score is calculated. In this game sample, it looks as if the amount of tweets would affect the score, don’t you think?

Talking about megajournals, do we have examples of them in this web application? Turns out there are only two: PLOS ONE, and Scientific Reports. 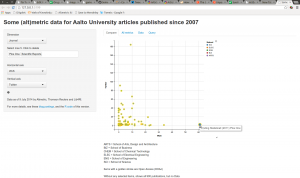 It looks like being Open Access doesn’t harm impact, and why would it? A lot of activity here, both in the number of tweets and citations. But, citations and tweets don’t go hand in hand, something that has been shown to be the case.

Data Curator at Aalto University. When out of office, in the (rain)forest with binoculars and a travel zoom.
This entry was posted in Coding, Data and tagged Altmetric, altmetrics, DOAJ, ImpactStory, JUFO, Open Access, PLOS. Bookmark the permalink.