As of this week, there are exactly 900 articles published by Aalto University since 2007 recorded by Web of Science of Thomson Reuters, having a DOI, and with some altmetrics aggregated by Altmetric. With this data at hand, I made an updated version of the interactive web application I wrote about previously.

Due to some present shortcomings in Compare, note that

The app doesn’t tell quite the whole story.

First, to simplify things, I’ve changed all missing values to zeros. Second, some articles are in fact coauthored by several Schools, but in the process of duplicate removal, only one unique item is left, so one School gets it all. Which one of them, is more or less random.

To get you going, here are some possible use cases.

First, let’s have a look at water. Always a good topic.

While Title selected, type water repeatedly and choose as many items as you can (10). At least three Schools deal with water. The default comparison is between WoS citations and Mendeley saves. In my selection, one article stands out in this context. 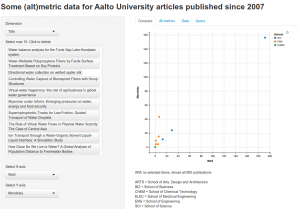 Hover over the lone blue circle in the upper right corner, and you’ll see a few characters of its title (Directional water co), the year of publication (2010), and the name of the journal (Nature). Switch over to the All metrics tab. Here, graphics is courtesy of rCharts, another great R wrapper, this one to NVD3. 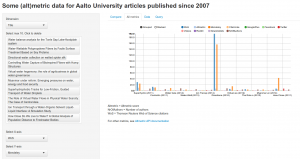 Because of the scale and the high values of both WoS and Mendeley, other bars are barely discernible. Opt out WoS and Mendeley by clicking the dot next to their legend. This way, the undergrowth shoots upwards. 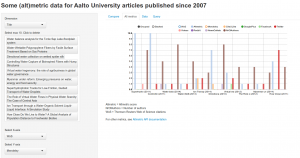 Note that not all values are conceptually equal; NrOfAuthors isn’t a score but an attribute of the article, and the Altmetric score isn’t a count in the same manner than the number of tweets, for example.

Move over to Data. Sort articles by year. In this sample, the one with most citations is also the oldest, which makes sense. 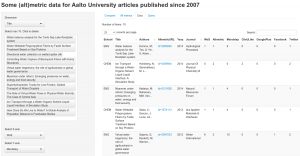 Continue by sorting the columns one by one. You’ll see that many metrics are all zeros (remember what I said about zeros above), Twitter being often an exception.

In their paper Astrophysicists on Twitter: An in-depth analysis of tweeting and scientific publication behavior ($) Haustein et al. show how, in their target group, there is a general negative relation between scientific impact and Twitter activity, although there are exceptions. Is that the case at Aalto University too? Switch the dimension to Journal, and pick those ones with astro in the name (there are 4). We make a quick & dirty assumption that articles published in them indeed are astrophysics. Let the x-axis remain WoS, but change y to Twitter. 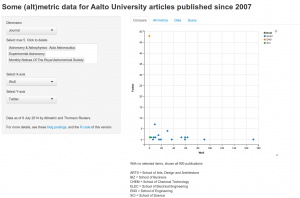 One article is quite high up on the Twitter axis whereas the rest hang low, which seems to back up research findings. The comparison between Twitter and NrOfAuthors reveals further that the exception has only one author. A notable feature of astrophysics articles is that the number of authors is relatively big, in hundreds rather than in tens. 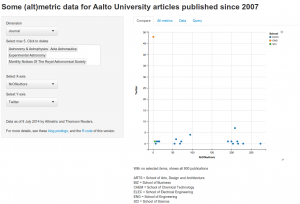 What is the affiliation of the author? The color of the circle tells that the School is ENG and not SCI where the major part of astrophysics research is done at Aalto University, in the Metsähovi Radio Observatory.

Out of curiosity, let’s have a closer look at the article. Go to the Data tab, sort by the Twitter column, pick the highest one, and follow the link to Altmetric. In there, peak into Demographics tab. There we have a world map of tweeters, and the type they belong to, determined by what people write in their Twitter profile I understand. It seems that the article has got most attention among general public.

Click the title at Altmetric. This brings you to the site of the journal, ScienceDirect by Elsevier. But wait – because here we have a non-open access journal, you might not get any further. Instead, let’s turn to Google Scholar. From this profile page, we can finally see that indeed the author is not an astrophysicist, and – if you are interested to read the article – it is available as an Accepted Author Manuscript version at ArXiv.org.

There are 7 different authors among these 19 articles we have been investigating. From them, the only one with a Twitter account is he who turned out not to be an astrophysicist. However, like Haustein et al. note, Twitter is a versatile tool.

Researchers have multidimensional lives – they might be avid runners, foodies, sport fans or enjoy stamp collecting – and their discussions on Twitter might include these various activities (Bauer, 2013). Hence, at least in the case of the astrophysicists analyzed in this paper, researchers’ activity on Twitter should not be considered as purely scientific, as Twitter is not restricted to this single type of communication.

I haven’t a clear picture of how much Twitter is used at our University, although I have a hunch: not very much. A good starting point to dig deeper into this topic could be the Aalto list maintained by Mikko Heiskala. BTW, Mikko gives out a Aalto University Weekly, worth a look.

Rewinding back to water for a moment. The 10 articles I mentioned above have 15 different authors from our University. All but two come from the cross-disciplinary Water & Development Research Group. Two persons out of these 15 authors have a Twitter account. The other one seems to be for private life activities only (sport, in this case).

We have looked at a tiny sample of Aalto University researchers. Among them, the only somewhat active, open Twitter account has an About text that says

materials researcher inspired by nature, working on water-repellent surfaces and other functional materials.

A short side-step. Before I tell you who this person is, I need to ask myself: is it OK to do so? In his blog posting Twitter as Public Evidence and the Ethics of Twitter Research, Ernesto Priego summarizes recent discussion on this issue, especially geared to situations where you gather Twitter data from the streaming API or some other source where you have access to potentially millions of tweets.

Next: homework! Take a look at altmetrics of Switchable Static and Dynamic Self-Assembly of Magnetic Droplets on Superhydrophobic Surfaces, an article that Ras has been coauthoring. Select it by name from the Title, or make a Query by the DOI 10.1126/science.1233775

One final note. If you look closely, there are in fact two false positives among my water articles here. This is due to inevitable but embarrasing bugs in the algorithm that tries to match affiliations. Will be fixed. Sorry about that.

Data Curator at Aalto University. When out of office, in the (rain)forest with binoculars and a travel zoom.
This entry was posted in Coding, Data and tagged Altmetric, altmetrics, ggvis, R, rCharts. Bookmark the permalink.