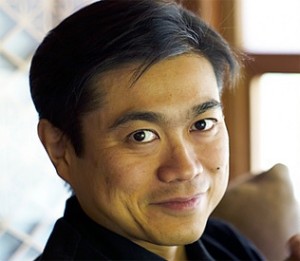 The newly appointed director of the world-renowned MIT Media Lab, Joi Ito, paid a flying visit to Aalto TaiK’s Media Lab on Wednesday 14th September. Joi Ito has been a leading light in the movement for openness and de-restrictions in intellectual property. He was recently listed by Businessweek as ‘one of the 25 most influential people on the web’. Amongst his many ongoing responsibilities he is chairman of the Creative Commons organization.

During the 90 minute visit, hosted by Media Department and AMF director Prof. Philip Dean and Prof. Teemu Leinonen, Joi met with staff and students of the unit. Discussions were held towards increasing strategic collaboration between the two Media Labs in areas of shared research interest, especially in research related to open data and its exploitation within new services for citizens. It was agreed that a team from Aalto’s Media Lab will travel to MIT to continue the discussions on collaboration later this academic year. Joi was also very happy to hear that the Aalto Media Factory in its new premises on the Arabianranta campus will be opening its own Fab Lab this year, a digital fabrication facility and member of the global network of fab labs coordinated by MIT’s Center for Bits and Atoms.

Marko Ahtisaari attended the meeting on behalf of Nokia and the discussions also resulted in an idea to join forces within some of the events planned by Nokia within the World Design Capital 2012 program.

Joi Ito is also known as a keen scuba diver as well as portrait photographer. He was presented with the 3rd Edition of the Helsinki School (Young Photography by TaiK) photographers in memory of his visit. His own photographs from the meeting have already been published on his photo blog on Flickr. See http://www.flickr.com/photos/joi/sets/72157627671631862/with/6148356200/

I’ve been adding support for several popular software frameworks and programming languages into the AaltoWindow platform. The work has progressed quite well I think, and currently multitouch-enabled AaltoWindow applications can be