One of the talks at the recent Service Goes Accessible symposium was Social media and open access – the future of research? by Dr Toma Susi, Aalto SCI. From the abstract of his slides:

Another recent development is the increasing popularity of social media. It’s adept use is becoming an integral part of science outreach. In addition, it seems that such activity can directly influence the number of article downloads and citations, although more studies are needed to ascertain this effect.

This made me wonder how much our publications are visible and mentioned in various social media in the first place. To start with, I asked for an API key to two of the most well-known aggregator services, Altmetric and ImpactStory. Their APIs can be easily queried thanks to two R libraries provided by rOpenSci: rAltmetric and rImpactStory.

As a concept, altmetrics is still in its infancy, and a lively discussion is going on whether it aims to offer an alternative or complementary to traditional, citation-based metrics, a toolbox to measure the varied forms of scholarly communication of the digital age, or yet something else or all of this. For a readable introduction to various issues around altmetrics, see Judy Luther’s blog post Altmetrics – Trying to Fill the Gap and its comments. As a side dish: steps in scholarly communication in a handy, chronological table Why ’altmetrics’ now? by Tomoko Tsuchiya.

From all Aalto research output I decided to just take a look at publications with a Digital Objective Identifier (DOI), and more specifically, only those DOIs that the Thomson Reuters Web of Science (WoS) is aware of; in addition to just mere counts, I wanted to have a look whether there would be any signs of similar correlation between Mendeley saves and WoS citations reported by e.g. Altmetrics in the Wild: Using Social Media to Explore Scholarly Impact (referred to by Susi). My time span: from 2007 to present day. Please note though that I am not a scientist, and this blog post should not be taken as scholarly research. I am just curious.

The day when I ran the Altmetric query, late last week, the number of Aalto DOIs according to WoS, published since 2007, was 6879. Out of these, the Altmetric API returned metrics to 388.

rImpactStory returned a rather elaborate nested list, and with my present R skills I need more time to digest it. Unlike in rAltmetric, there is no helper function (yet) that would pull out relevant scores in a data frame. Therefore, I left the ImpactStory query result unprocessed for the moment and instead, made manually two collections at the ImpactStory web site. The first one is on publications that occupy the top 10 in Mendeley saves, according to Altmetric. The other collection is on publications that take the top of WoS citations. Please take a look how ImpactStory visualizes different metrics, the links are given further below. I hope they are persistent. For a list of all metrics that ImpactStory gathers, see their FAQ.

Note that also Altmetric makes visualizations. Moreover, they have introduced an Altmetric score. One example of a page with the Altmetric “donut” and the score: Rebounding Droplet-Droplet Collisions on Superhydrophobic Surfaces: from the Phenomenon to Droplet Logic. This publication has had good media coverage also locally.

So, according to Altmetric, which Aalto publications have been mentioned, shared, recommended and made attention to the most? Legend of the numbered lists below:

Top10 Mendeley saves and Top10 WoS citations are each plotted as a grouped bar chart along with scores of WoS and Mendeley, respectively, and with some – significantly lower – other metrics.

Note that while Facebook doesn’t readily come to mind when whe talk about science, “The Altmetric list will be papers popular with both scientists and members of the public”, as Euan Adie from Altmetric commented in Nature News blog. 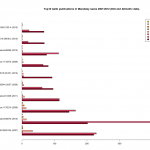 Note that these are articles with 1) a DOI and 2) data in Altmetric. 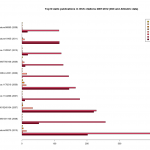 The same articles as an ImpactStory collection.

The authors of Altmetrics in the Wild write:

Again, this blog is no science. That said and while at it, I still wanted to give R a try.

First I subsetted the data to those items published between 2009 and 2011. That would be my restricted sample. Any relation between these two variables, Mendeley and WoS? 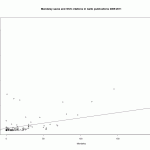 Looking at the scatterplot: perhaps. Then, with the R cor function, the Spearman correlation. The result: 0.614077 (n = 113). To my understanding, the score is moderate. But does it speak about the possible influence of Mendeley saves to the WoS citation score?

Last fall, I saw Olli Parviainen from Verkostoanatomia show and tell about Gephi and how to visualize networks with it. Ever since, I’ve been wondering how to

Thanks to the alertness of the reader(s) of this blog, the treemap of the previous post was found to be wrongly plotted. Contrary to what I wrote (albeit a